EarthWorks is live now on Kickstarter: 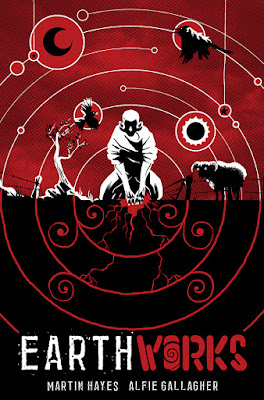 I blame Toppi. I picked up a collected volume of his work, The Enchanted World, and found myself swimming through the pages. His art looked chaotic, yet controlled and human and awe-inspiring. Dirty big dollops of black and careful controlled cross hatching built up. I wanted to have a go at some of that expressive, more free flowing style. In my mind I was seeing Toppi meets Creepy magazine ink wash art.

I previously worked with writer Martin Hayes on a number of projects, three volumes of Gentlemen Ghouls in Aces Weekly and within the short story collection Debris. As we had an established working relationship it was a no-brainer to drag him into my scheme of a more kamikaze freeform style of project. I wanted to work on something that wouldn’t completely work and Martin was willing to humour me while I made mistakes and stumbled.

As I was attempting a more free sketchbook-orientated style I also wanted Martin to feel he had a blank canvas to come up with whatever type of storyline would get him fired up also. He duly dug in and dug up a plot inspired by his long running interest in the mystery of the Hexham Heads.

When the ball started rolling on this I found myself setting a few rules that deviated away from my usual clean line comic page drawing practice: 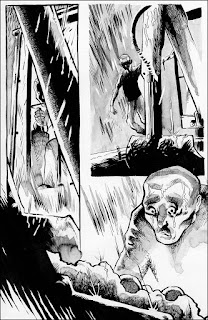 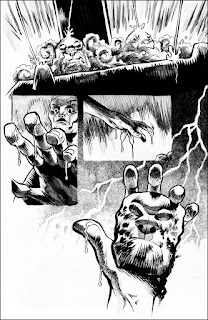 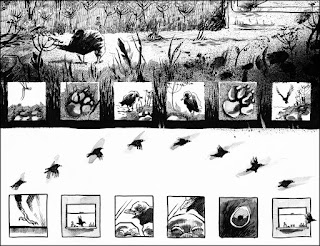 I was happy to commit to something that art-wise would be inconsistent, uncertain and at times just plain not work. Making mistakes is a freedom and it felt consistent with the times making this haphazard project while we made it through haphazard ‘what happens next?’ pandemic days.

As well as a different more scrappy drawing style, myself and Martin also set up a different more freewheeling style of working from script. Martin mapped out the overall shape and feel of the story but supplied script pages one by one sporadically as we both worked around life, day jobs and other projects. Instead of detailed panel breakdown script pages, Martin would supply an outline of the page and also dialogue. It was left up to me to breakdown and layout the page as I saw fit. In my head I wanted to tap into that flowing dreamlike page layout that Toppi does so well but in reality I found it hard to deprogramme from ‘little boxes’ standard square panel comic booking.

As I had worked with Martin previously, I didn’t have to worry about the shorthand of my loose and stripped down layout sketches. In hindsight, I would have loved to spend a bit more time breaking things down and heightening the design elements of the pages at the layout stage. Have confidence to break things down rather than rely on realistic representation. But making mistakes is as much learning about your limitations as your strengths.

My big take away from this project is; no matter what working rules you set for a comic project, they take time. A lot of time and focus. When I started this I thought I’d blitz through this in a snappy, scrappy fashion but the reality was it took as long as any other comic project. I found it hard to untether from a lifetime of representational drawing and things got bogged down and laboured here and there. As stated before, this project was unashamedly about giving something a go and being unafraid to make mistakes and make something that didn’t fully work. At the end of the day it’s just a comic book, not life saving medical breakthroughs.

My other big take away from all of this is; just because Toppi makes that flowing dreamlike drawing and design look easy and natural, it isn’t. Bloody Toppi. 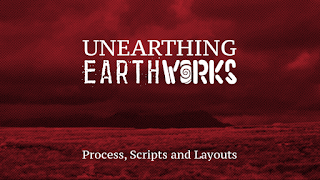 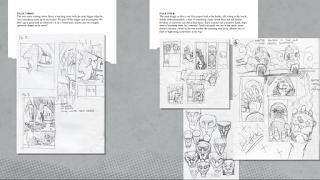 Unearthing Earthworks is a PDF document which contains process, full script and layouts of the project to give you a messy under the bonnet look at myself and Martins working methods on this project. It is available as a Stretch Goal on the Kickstarter project.

Posted by Alfie Gallagher at 13:48